While the media was obsessively distracted by the last-minute Punch & Judy fish negotiations, little or no attention was paid to public procurement arrangements post-Brexit. This is a far bigger sector of economic activity than fish, estimated to account for approx. £290 billion in the UK and some €2 trillion in the EU. The following is a brief summary of what is known at this point.

However, there is much more detail as to the UK Government’s intentions in its Green Paper Transforming Public Procurement which outlines its broad policy approach for higher value or “over-threshold” contracts and its new guidance notes (PPN 11/20) on lower -value or “sub-threshold” public contracts. These documents were quietly published the UK’s Cabinet Office website on 15th December with zero fanfare and to complete media indifference.

The following is a brief attempt at some preliminary analysis with particular reference to the Irish perspective.

The green paper, which is open for comments until 10 March 2021, sets out how the British Government intends to operate public procurement in accordance with its WTO (Government Procurement Agreement) and bilateral commitments from 1 January 2021. The focus of the green paper is on public contracts that exceed WTO/GPA value thresholds set out above.

While the green paper indicates some proposed significant procedural divergence from the current EU public procurement regime, it would appear that, fundamentally, public contracts covered by the UK’s WTO/GPA commitments will continue to be procured on the basis of advertised competition open to commercial entities in WTO/GPA countries and other countries with which the UK has bilateral arrangements on public procurement. This approach will be welcomed by Irish suppliers to the UK/Northern Ireland public sector market. The Ministerial Foreword accompanying the green paper sensibly acknowledges that public procurement is a two-way street and that proceeding in this manner “guarantees access for UK suppliers to £1.3 trillion in public procurement opportunities in more than 48 countries”. The Foreword also goes on to reassure the market in stating that: “We will respect our commitments to not discriminate against parties in this and other bilateral international trade agreements on public procurement.”
The green paper indicates that there will be changes to simplify and streamline the remedies available to aggrieved tenderers wishing to challenge contract award decisions but acknowledges the key WTO principle that such remedies must be “effective”. It remains to be seen, therefore, how the new remedies regime will operate in practice and how “effective” it will be.
For the moment, therefore, it would seem that the basic market-access rules will remain substantially unchanged for over-threshold public procurement in the UK/NI market. Pending some proposed changes flagged in the green paper, Contracts Finder will be retained to ensure that suppliers can search for contract opportunities online. Scotland, Wales and Northern Ireland will continue to have their own dedicated public sector procurement websites. However, UK/NI public contract notices will no longer be published on the EU portal, Tenders Electronic Daily .
Of course, much will depend on the detail of the UK legislative changes in due course as well as the detail of how the trade and cooperation agreement with the EU is implemented in practice. There remains much uncertainty with regard to matters such as equivalence of standards and professional qualifications, data protection, rules of origin, VAT, temporary cross-border access for consultants in performing contracts and so on.
Irish suppliers with an interest in the UK/NI public sector market should continue to monitor the OGP Guidance on Brexit which will continue to be updated in the light of further developments in the coming weeks/months.

This is the orphan child of public procurement, often overlooked and seen as of little consequence by government and EU policy makers over the years. However, for many Irish, Northern Irish and UK SMEs, this market is key to their development and growth and sometimes their very survival. While the individual contract values may be relatively low, it must be borne in mind that cumulatively the value of this business represents possibly as much as 20% of the UK government’s annual spend of £290 billion on public procurement.

This sub-threshold sector is a vital first step on the business ladder for many small enterprises and start-ups as it enables them to establish their credentials in the successful performance of public contracts. This is a critical requirement in helping them to move up to the bigger value contracts in the “over-threshold” arena. There are many enterprises throughout Ireland , NI and the UK who have travelled this path to greater success benefitting from the open access to such contracts across our jurisdictions that has prevailed up to now.

To date the EU Commission has had little to say on this market sector other than in its “Questions and Answers” issued on 24 Dec on the EU-UK TCA which includes the following:

“The Agreement further provides for non-discrimination of EU companies established in the UK (and vice versa) for small-value procurement, i.e. below the threshold of the GPA (from EUR 139,000 to EUR 438,000, depending on the contracting entity, and EUR 5,350,000 for construction services).

The foregoing seems to imply that contracting authorities in the UK/NI and the EU may “reserve” or limit sub-threshold contracts to entities “established” within their jurisdictions and thereby exclude all other would-be cross-border operators from tendering for such contracts.
The prohibitive cost of cross-border “establishment” could effectively exclude many SMEs from competing across borders for sub-threshold contracts and this is hardly a good outcome for SMEs on either side, but especially so on the island of Ireland.
The UK Government’s plans for this sector were signalled in the Ministerial Foreword to the Green Paper as follows:
“We have already introduced a policy which will allow below threshold contracts to be reserved for UK suppliers which will come into effect at the end of the Transition Period.”
On the face of it, this is bad news for the many SMEs across Ireland who might want to compete for business in the Northern Ireland or wider UK public sector market because it raises the stark possibility that they may be excluded from this market from 1 January this year.
The detail is set out in the UK Cabinet Office Policy Note PPN 11/20 of 20 December 2020 and accompanying guidance notes on reserving public contracts.

The detail of the policy includes a number of important qualifications:
(i) reserving such contracts is discretionary and contracting authorities may continue to allow tenders from EU Member-States (including Ireland) if they consider that doing so will deliver better value for money;

(ii) The reservation policy should not be applied to below threshold procurements which are of cross-border interest (i.e. which may be of potential interest to suppliers from EU Member States including Ireland) AND which involve the provision of goods into Northern Ireland;
(In the context of the island of Ireland, given its geographical proximity and the two-way openness of this market up to now, it is arguable that all such contracts are inherently of “cross-border” interest to ROI suppliers particularly in the border counties.)

(iii) a justification for the decision to reserve/not reserve must be recorded in all cases; and

(iv) in the case of reserved contracts, contracting authorities must satisfy themselves that the tenderers have a substantive business presence or “in the UK and are not simply “brass plate” operations registered in the UK to circumvent the reservation policy.

Given these qualifications, it is clear that the impact on Irish suppliers will very much depend on how the policy is applied in practice. It may be that many contracting authorities in the UK/NI will continue to seek best value for money by generating maximum market response via open competition without availing of the option to reserve. On the other hand, if the policy is applied on a protectionist basis to exclude EU/Irish suppliers as far as possible then that is likely to have political repercussions on the EU/Irish side with inevitable pressure from market operators to apply a reciprocal exclusionary policy vis a vis UK/NI suppliers. (A classic lose-lose outcome of protectionism.)

The UK government is of course within its rights to adopt this course under its WTO commitments, but it seems to have done so with little or no real consideration as to whether this will actually benefit UK/NI taxpayers and UK/NI enterprises in the long term.

You would expect such a major policy change to have been subject to considerable study, analysis, and consultation but there is nothing in the Policy Note to suggest that any assessment of the costs, benefits and risks was undertaken.

The new approach will be seen by many as contrary to the spirit of the Good Friday Agreement as well as having the potential to undermine much of the solid progress achieved by both governments in the promotion of open cross-border and East-West trade over many years since the GFA. This open policy was strongly supported by InterTrade Ireland, one of the cross-border bodies established under the Good Friday Agreement which did great work in educating small suppliers, North and South, on how to go about tendering for public contracts. Those efforts resulted in significant market penetration in both north-South and East-West directions to the mutual benefit of taxpayers and enterprises in both jurisdictions. Taxpayers benefit from greater competition and better value for money. Enterprises benefit from a much bigger market with more opportunities but also from greater competition (which is vital to the long-term health and success of all business.)

Apart from the economic benefits, there was undoubtedly an important “peace dividend” to this activity which helped greatly in terms of improved contacts and understanding between individuals, public bodies, and the business communities both in the North-South and East-West contexts.

Sadly, none of these positives appear to have been considered in adopting the new policy approach and are not even mentioned in the UK Government’s Policy Note and Guidance materials.

I personally hope that the Irish government/EU does not retaliate in kind, but it will be hard to resist the complaints from Irish business who will understandably be very angry if Northern Ireland and UK-based entities have free access to this business in Ireland while Irish operators are being excluded from this sector in the UK and Northern Ireland.

[1] conservative estimate based on typical spend pattern of public bodies on over and under-threshold contracts.

Copyright Bid Services Ltd. The material in this post is purely for information and discussion and does not purport to advise on matters of law. 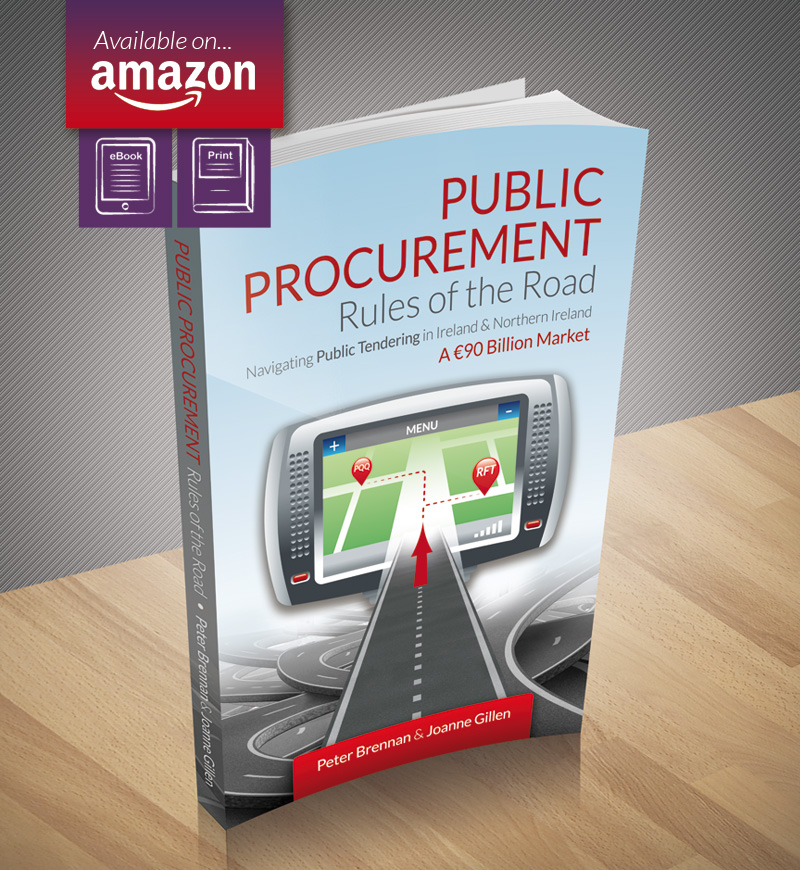